3 of Our Toughest USMLE Step 1 Questions From 2016

We’re just seven weeks away from the start of USMLE Step 1 testing season!

We combed through our thousands of USMLE Step 1 practice questions and found some of our hardest from last year, as determined by Peer Score.

3 of the Hardest USMLE Step 1 Questions:

A 34-year-old astronaut presents to the physician at NASA for a pre-launch physical examination. He is in good health and takes no medications. His temperature is 36.8ºC (98.2ºF), pulse is 63/min, respiratory rate is 15/min, and blood pressure is 110/65 mm Hg. On examination, he has a regular rate and rhythm without murmurs, rubs, or gallops. His lungs are clear to auscultation with good air movement throughout. His abdomen has normoactive bowel sounds and is soft, nontender, and nondistended. There is no edema on his extremities and pulses are 2+ and symmetric throughout. There are no rashes or lesions on his skin. Which of the following physiologic changes would be most expected during his trip?

Which of the following is true of this new medication?

A. The drug binds to the same site on the enzyme as the substrate

B. The drug decreases the binding constant of the enzyme

C. The drug decreases the maximal velocity of the enzyme

D. The drug is ineffective at inhibiting the enzyme

E. The effect of the drug can be overcome by high levels of the substrate

A 56-year-old obese female presents to her family physician for a routine physical examination. A lipid profile is performed and reveals a significantly elevated triglyceride level of 355 mg/dL. In addition to an exercise and diet regimen, she is placed on a medication to attempt to improve her triglycerides. One month later, she presents to the Emergency Department with intense abdominal pain, nausea, and vomiting. On physical exam, patient is afebrile with the only positive finding being right upper quadrant (RUQ) tenderness with palpation. An ultrasound of the RUQ is performed and provided below. Which of the following medications was likely prescribed to this patient one month ago?

Space travel poses a number of unique challenges for the human body because the body must adapt to life at zero gravity. Within the first two weeks in space, people will lose 20% of muscle mass and up to 50% of muscle strength due to a loss of gravitation force. On the cellular and molecular basis, protein synthesis decreases by 15%, and myofibers lose 20-50% of cross-sectional area. Bone mass decreases due to increased bone demineralization caused by up to a 70% loss of calcium through the urine and feces. Vitamin D levels decrease due to a significant decrease in sun exposure, and parathyroid hormone levels are also depressed. The degree of bone loss is only 1-2% per month. Immediately after launch there is a redistribution of fluid in the body.

Without gravity, the plasma redistributes from the legs to the head and upper extremities. This triggers the baroreceptors within the carotid artery, suppressing the renin-angiotensin system, leading to an increase of salt and water loss in the urine. This causes a 17% decrease in plasma volume within the first 24 hours in space. Stroke volume subsequently decreases and cardiac output also decreases.

Answers B & C & D & E & F & G & H: Answer A would be the physiologic changes that would be most expected during his trip.Bottom Line: Loss of gravity leads to a decrease in bone mass, muscle mass, plasma volume, and cardiac output.TrueLearn Insight : Be prepared for tables with up and down arrows on the USMLE as these have appeared frequently in the physiology questions. The best way to approach these questions is to systematically eliminate the choices that you know are incorrect. For example, you might choose the topic “bone mass” first, knowing that weight-bearing exercise (which requires gravity) improves bone density and lack of gravity would decrease bone density, you would eliminate Answers E, F, G, and H immediately. Then move onto the next topic that you feel most comfortable about and continue to eliminate the choices.For more information, see: Williams D et. al. Acclimation during space flight: effects on human physiology. CMAJ. 2009. Jun 23; 180(13): 1317-23.

The graph shown in the stem is a Lineweaver-Burk plot. The features of this graph are described below.

Answer D: The drug is effective at inhibition of the reverse transcriptase enzyme. If it was ineffective, then the green line (with drug) would be superimposed on the red line (without drug).

Bottom Line: A non-competitive inhibitor binds to an allosteric site, rather than the active site, on the enzyme. The Vmax decreases and Km remains the same.

The patient in the vignette is suffering from symptomatic cholelithiasis. Gemfibrozil is a medication that is given in patients with elevated triglyceride levels. This agent increases the activity of lipoprotein lipase, which hydrolyzes triglycerides, increasing its clearance. A common adverse effect is the development of gallstones. The ultrasound shows a gallstone (red arrow) within a gallbladder which exhibits shadowing (blue arrow).
. 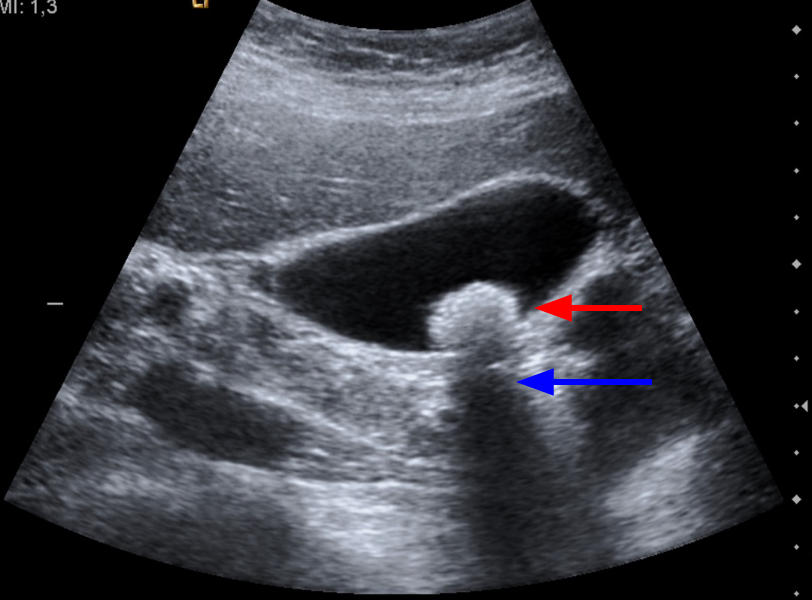 Answer A: Colestipol is a bile acid resin that is indicated in patients with hyperlipidemia. Many patients complain of its awful taste and an adverse side effect is an increase in triglycerides and would not be good for this patient.

Answer E: Rosuvastatin is a lipid-lowering agent that is indicated in patients with elevated LDL levels. A common adverse effect is hepatotoxicity and if the patient is also taking fibrates there is a chance of myopathy.

Bottom Line: Gemfibrozil is a medication that is given in patients with elevated triglyceride levels. A common adverse effect is the development of gallstones.

TrueLearn Insight : Lipid lowering agents are a popular topic and most of the times they’ll give you clues on the drug that has been used based on HDL, LDL, and triglyceride levels and the side effects that the patient presents with. It is much higher yield to remember these, rather than the biochemical mechanisms.

USMLE Step 1: Everything You Need to Know