The following is a free, sample question from our ABOG question bank.

Which of the following is the MOST appropriate treatment for a patient with gestational trophoblastic neoplasia (GTN) who is noted to have high-risk disease and a WHO score of 11 but desires future fertility?

B) Etoposide, actinomycin-D, methotrexate, cyclophosphamide, and vincristine is the treatment of choice for this patient.

The patient described above has Stage 3 GTN and also high-risk gestational trophoblastic neoplasia (GTN) with a WHO score of 11.

Initial treatment of these patients, especially those who desire future fertility, is multidrug therapy using etoposide, methotrexate, actinomycin-D, cyclophosphamide, and vincristine (Oncovin)—or EMACO. GTN remains a disease that is highly responsive to chemotherapy, with remission rates for low-risk disease close to 100%. Given this patient’s high WHO score, she will require combination chemotherapy.

Overall, for GTN, treatment depends on the FIGO staging and the WHO prognostic scoring system.

Actinomycin-D is an appropriate first-line agent for low-risk disease when there is a known reaction to methotrexate. This patient, however, has high-risk disease and would benefit from multiple drug therapy.

Hysterectomy is necessary if her disease is refractory to all treatments. It is not the initial treatment of choice, particularly in this patient who desires future childbearing.

Methotrexate is the first-line agent for low-risk disease, for which single-agent therapy is usually sufficient. This patient, however, has high-risk disease and would benefit from multiple drugs.

Suction dilatation and curettage would provide no benefit and is not indicated. It may seed more neoplastic cells into the myometrium and further promote metastasis.

Gestational Trophoblastic Neoplasia treatment depends on the FIGO staging and the WHO prognostic scoring system.

Persistently elevated beta HCG and bleeding after pregnancy is suspicious for GTN. Study Tips Series: How I Study Smarter For The ABOG 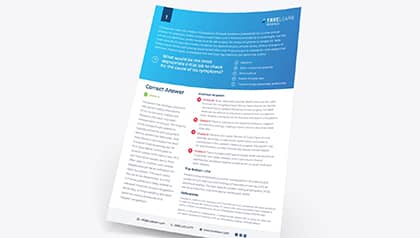